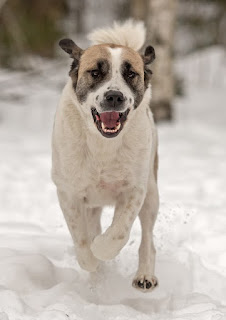 The weather was dark and grey as usually in mid December in my home town Mäntsälä, winter had not yet arrived but autumn was definitely over. I was hoping to get the first snow before Christmas, even a thin layer would do to give some light in the darkness. After I finished some paper work I had for that morning I left for a walk in nearby forest and took my 8 year old Central Asian Ovcharka female Pipari and her daughter Oili with me. Sun was gleaming mercifully through the naked trees and made the nature look very beautiful in a rough way. The path we took led to a small lake. I sat down on a rock and enjoyed both the silence and the view. Dogs were playing in the ice cold water. Despite the bare ground, my spirit was high and I could feel the approaching Christmas.

Back home I let the dogs stay loose at my fenced yard as normally and went inside to continue working. Pipari laid down in a sunny spot and soon Oili joined her to keep an eye on the neighborhood. It was such a good idea to buy the whole fencing project from a professional fencing company some years ago though it was a bit expensive. It was quite challenging to dig the holes into the ground full of rocks and roots and in the forest part they needed to use a small excavator. In the end all poles were erected in cement but the fence was steady and I didn’t have to worry about any intruders or dogs leaving the property.

One hour later I went outside to take the girls back into the kennel and let other dogs run free on the yard instead. Normally they join me when I get out but this time nobody came. I went to the kennel area and called. Nothing. I thought they had found some old bone treasure and were enjoying that somewhere in peace and privacy. So I took the leash with me and went to look for them.

“If only the snow was there, I could have tracked them down.”

After a while it was clear that they had left the property. Tried to find a hole in the fence or some marks where or how they had left and which way to go but found nothing. If only the snow was there, I could have tracked them down. Hurried to the lake in case they had returned back there but not a sign. Luckily the private road passing by my estate comes to a dead end at the lake and the road is very quiet, especially winter time. Started walking towards the other direction, towards civilization. Two kilometers later I ran into a bigger road and turned back to get a car. Called to my neighbors and asked them to let me know if they see my fugitives.  These lovely people were immediately ready to help me.

“They would never leave their own territory unguarded for such a long time. “

I took my SUV and crawled along the roads with windows open, calling for my dogs. I drove through all the roads nearby and even started timidly to check the roadsides. Returned back home every now and then expecting to see my fugitives happily home. But no, not a sign of them. I started panicking. Drove the roads back and forth, stopped the car and called for the dogs. I even entered strangers’ yards hoping to see Pipari and Oili recognizing my car and running happily to me from behind some old barn. I turned to every tiny road that only tractors use. I expected to spot my white-fawn coloured dogs easily against dark background but saw nothing. I was confused. Even if they were enlarging their territory, I should have come across them long ago. They would never leave their own territory unguarded for such a long time.

After three more hours I was crying desperately. I knew they would have returned home long ago if everything was ok. My mobile rang. My neighbor had catched Oili on her way home. She didn’t want to take any risks so she thought it is better to put her in the leash as she was somewhat confused. I rushed to pick her up while my subconscious was alarming. Why the duo had split? Why had Oili left her mother? I tried to control my imagination and stay calm.

“I think your dog is in our swimming pool”

My angst only grew bigger when we got back home. Oili was in good shape but somehow confused and restless. Cried my eyes out and took her to her own kennel. I backed up out of the gate again to continue searching when a white car blocked my way. The driver asked if I had lost a dog. I nodded crying. I think your dog is in our swimming pool, he said. Will you join me? I nodded again silently, couldn’t hold my tears. I was too afraid to ask anything but that moment I knew she was dead. Drowned and floating on the water.

Followed his car to a deserted estate. It was located only 500 meters from my yard as the crow flies, behind my house, on the other side of a field. Had no idea there was a swimming pool. I approached the pool slowly, afraid of what I would see. There she was. She was standing on her hind legs, trembling like crazy holding the ladders tight with her forelegs to keep her head above the water. The pool was not in use but it was filled with rainwater. It was clear that without her own initiative to hold the ladders she would have drowned hours ago. 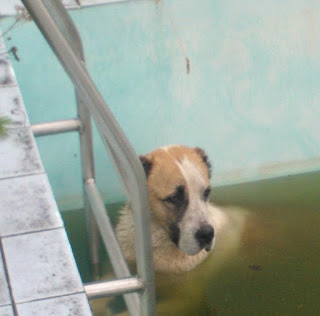 Had to call for help to lift her up. My dear neighbor Heikki came with his son Jukka. Hanging on the edge of the pool I managed to fasten a strong collar on her neck to help the lifting. When Jukka jumped into the pool with his clothes on, Pipari growled at him. Almost immediately the look in her tired eyes changed showing relief as she seemed to understand that she was being helped now.  Jukka was still hesitating to approach this big guardian dog but in the end he took her into his arms and lifted her up towards us and Heikki pulled her out of the pool.

“this was my Christmas”

I was so happy that I couldn’t stop crying and hugging my trembling and smelling precious granny. She was so weak that she didn’t have the strength to stand on her feet, she simply fell down. I covered her with the blankets the retired estate owner gave me. After a few minutes rest, Pipari reached for Jukka who was sitting beside me and licked his hand. I saw Jukka’s eyes getting moist. It was clear that he was the hero of Pipari. Being still too exhausted to get into the car, Jukka lifted her gently in my SUV.
Finally this adventure was over. Back home I washed my smelling fugitive granny and gave her some painkillers. She fell asleep by the fireplace. Not sure if she went through today’s horrible happenings in her dreams but she certainly had a pretty tough nightmare. I sat beside her for hours just watching her. It was unbearable to think that she had probably heard me calling for her all the time but was only able to hold the ladders and hope somebody would come. I am so thankful I didn’t loose my dear friend in a horrible way like this. I bent over Pipari and kissed her strong muzzle – this was my Christmas.

Next day I stopped by the retired couple to thank them for their help and concern. They told me that Pipari and Oili had visited their summer house earlier that day and then left back towards my house on the other side of the field. Between their summer house and my house was this old deserted estate. My dogs had ran through that estate on their way home. Suddenly few hours later Oili had come back to their summer house, alone. He was wondering where the mother dog was but after a while he told Oili to go home and walked her towards the deserted estate. Oili started running and he saw her stopping by the swimming pool. As he thought she was thirsty and the pool was too dangerous place to stop for a drink, he chased her away.

Later that evening it was still bothering him why Oili came back alone and why she stopped by the pool, so he decided to go and check the pool. Just to be sure. Thank God he did! Otherwise nobody would have found Pipari in the pool in time. Based on the time line she had been struggling in the pool for hours fighting against drowning and hypothermia. There was probably not much time left anymore when he found her. Oili had probably been hanging around the pool waiting for her mom to get up and then finally left for some help first to the estate owner and then home to me.

Today Pipari is a happy pensioner. She will be 10 years soon and is in remarkably good fit. Last year she was Veteran World Winner 2014 in World Dog Show in Helsinki. I am happy she was alive to experience this unforgettable moment. My beautiful brave granny.

Wishing you all Merry Christmas! 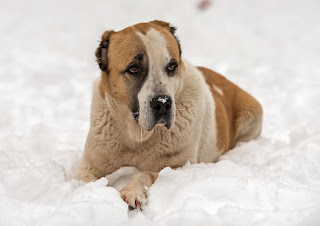